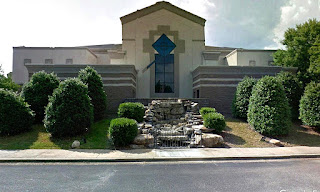 Yeah they're connected. They're at either end of a chain of thought that raced through my alleged
mind at 9:52 this morning.

Peg and I were sitting at the kitchen table at that time, playing our morning game of Phase Ten. Then we saw the mail lady delivering mail to folks in our little cul-de-sac. We've seen her lots, over the last 36 years, but always at 2:00 to 3:00 in the afternoon.

We talked about that.

Peg mentioned the same lady delivered mail to our church, sometimes availing herself of our facilities there. That got me to thinking that sometimes, the church is closed for holidays and the like. Peg pointed out that it's likely that mail would not be delivered on those days anyway, so ....

But the train of thought had already pulled into the station, after I'd thought churches ought to be available 24/7, which brought to mind one of the most meaningful "church moments" I've ever had.

In an empty, quiet sanctuary.

It was late 1998, and I was at work. My Brother Art ... my only sibling ... called me an update on his esophageal cancer. He told me that it had metastasized and was inoperable. Instead of curing it, he said, he would now be on a "course of treatment". Which meant for his final days.

That hit me pretty hard, mostly in wondering what I could do, and feeling helpless. Art had adopted the Jewish faith when he married a Jewish lady from Long Island, and had resisted all my efforts to at evangelism.

Now, with him about 1,000 miles away, there really wasn't anything I could do.

At the time, I was attending a prayer meeting every week, at Kingwood Assembly of God .... the one pictured up there ... in the neighboring community of Alabaster, AL. The times there were very intense, some miraculous things had happened there, so I left my office, got in my car, and drove down there.

I stopped by the Pastor's office there, and asked June if I could go to their altar to pray. She said "Sure", so I did.

In the silence of that place, I poured out my heart and my desperation to God. After a few minutes, I had what can only be described as a "God Moment". He said something like I'd done all that I could, and Art was in His hands, now. And that I was to trust God with my brother now, just as I trust Him with me. Not that I was to trust in where Art would spend eternity, but to simply trust God.

The burden and the trouble in my soul disappeared instantly! I'd probably been trusting in my own actions, and whether I'd done the "right things", and it took only a word from God to instantly erase all those thoughts.

I stood up, brushed myself off, stopped at June's office to thank her, and went back to my office. And the burden of all those thoughts, and Art's condition, never came back.

When I think of 40,000+ SBC churches, I have to wonder how many of them have meaningful "prayer lives". FBC Pelham doesn't ... and didn't back in the late 1990's, or else I would have gone there to pray on that day, right? Even though it was on the way to Kingwood, I didn't even think to go there, probably because the really neat things ... the "God things" ... had happened at Kingwood.

I've come to understand that the whole prayer things is really between me and God. But I need to order my own life to help FBC Pelham and other churches to see that His House should really be a House of Prayer ... not just in some scripture reference few people know anyway, but actually and collectively, in practice.

Like it was at Kingwood, all those years ago.