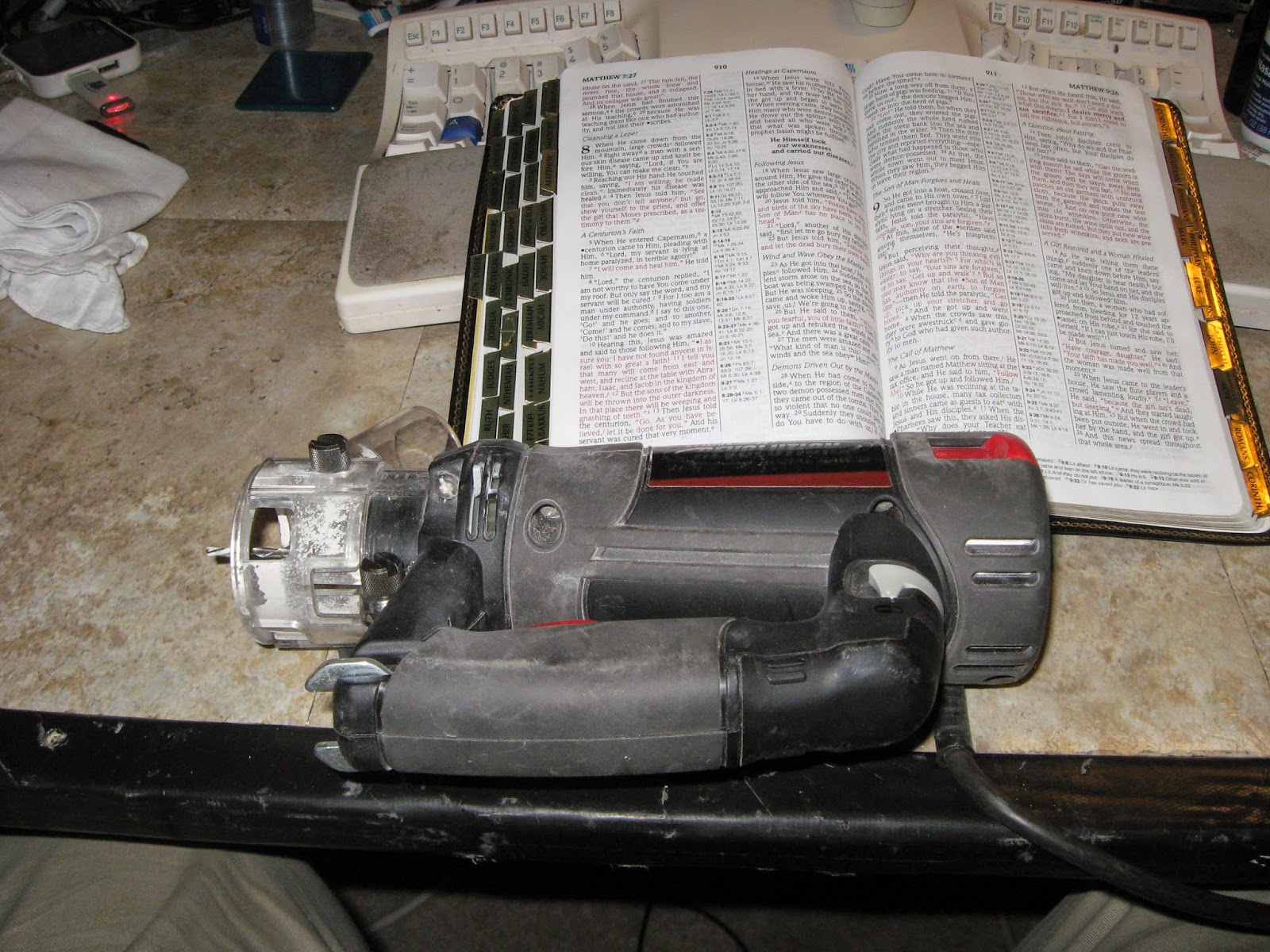 You never know when you'll need them. I offer the two on the right, as evidence for the prosecution.

The one at the top is, or course, one of my Bibles. An HCSB that was given out, gratis, at a B21 Meeting during the SBC Convention in Louisville (thanks, Lifeway).

The gray one that's all dusty, at the bottom, is called a "RotoZip". It's sort of a mini-router, designed to let you "plunge cut" and saw things without a big blade whirring away. It came with various semi-drill bits, which you chuck into the business end and then run'em up to 20,000 rpm, if you want.

I needed it today as I wanted to take the baseboard up in part of the basement and check to see if the bottom plate (the 2X4 fastened to the slab, that the wall's nailed into) was dry.

It was. But to get to it and check, I had to remove about 1-3/4" from the bottom of the drywall. I went and got the RotoZip, as it was perfect for the task. I even had the clear plastic attachment that the vacuum plugged into, and when I cut 1-3/4" of gypsum board there was no dust whatsoever. It was really cool!

Now: the cute part about all this is that I bought the RotoZip maybe 15, maybe 20 years ago in a fit of weakness and under a barrage of heavy TV advertising. I bought it and brought it home but I didn't actually use it. Well, I did a couple of really small things like punch a hole in a piece of plywood, but nothing approaching slicing through 12' of drywall. Which took about 20 seconds.

I was really glad I'd bought, and kept, it.

While I was pondering the wisdom of keeping my tools ready, I was reminded of an episode from 40+ years ago. It involved some Discipleship Training, 4 weekend retreats under the tutelage of Doug Snider, founder of Shamgar Discpleship, as it is now known. I believe we were the 6th training class he'd held, and he came to Indiana to put them on for 12 of us, in a Southern Indiana Methodist Campground.

During Shamgar, we learned a particular method of presenting the Gospel in a story-telling, non-threatening way. The method generally involved the verses in Billy Graham's Tract "Steps To Peace With God", although we memorized them and did not use the tract as a presentation. The idea with Shamgar was to equip believers to use whatever they had in their hand .. whether a cocktail napkin on an airplane, or just a conversation on a street corner, to promote the gospel.

I'd learned the program pretty well, and in fact, presented it to a Sunday School Class at a Boy's Prison, before the Shamgar Sessions were even over, and 6 kids prayed to trust Jesus.

Our last Shamgar Session was May of 1971.

Cut to June 1991. We were on a Mission Trip to Nassau, and were leaving to come home. When we went to the airport to return home, Sam Neugent, our leader, asked me to stay behind with the luggage and shepherd it through the Departure process, which he'd pre-arranged. I did that, and when I got through Customs, Immigration, or whatever department oversees all that, I walked down to the gate. The rest of the crowd was already there.

As I walked past an empty gate adjacent to, but across the hall, from our gate, I heard someone in the gate say "But love is love...", to which another voice responded "But if it's not the love from God, it doesn't count". This got my attention, so I backed up two steps and glanced into the waiting area.

I saw two gentlemen .. one in a suit and one in a Baggage Handler Uniform ... talking. It was obvious that the guy in the suit was witnessing to the Baggage Handler. So I walked over to them and said "Excuse me ... do you mind if I listen in?" They both said they didn't mind, and continued talking.

After perhaps 5 minutes of back and forth, I asked if I might say something. They said yes, and I said "You know, all this is baloney". They looked a bit surprised, and asked why, and I responded, to the Baggage Handler,that the only thing that really mattered is, "If you died tonight, do you know where you'd spend eternity?"

He said he wasn't sure. I said if he wasn't, I WAS. I asked him if he'd like to change that, he said he would, and I launched into the "Shamgar Presentation" I'd learned 20 years before. Now I have to say I most likely could not have recited it 15 minutes before, but I didn't need it then. When I did, God brought it back clear as a bell. At the end, I asked him if there was any reason he would not want to be a Christian; he asked me two questions, and after I answered them, he said he'd like to become a Christian.

We prayed a prayer, and then I said "Wait here a second" and I ran to the next gate and asked one of our youth for two of the tracts we'd used on the trip. When I got them, I ran back to the other gate, gave one to each man and said "Here's what you just did". I then spoke to the guy in the suit and said "He's yours, brother .. see that he gets into a church and gets fed." He said he'd do that, and I ran back to our gate and got on the plane, the flight having already been called.

As I was sawing the wallboard this morning, my mind went back to the airport in Nassau, and I reflected on how wise it is to keep your tools ready, because you never know when you're going to need them.

God certainly knows how to set that up.  And, sometimes, it's right now!

And it's just YOU.