No. Not Telstar. TRELSTAR Is What It Are. 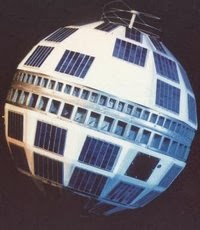 It's not the big round thing over there on the right. Even though it feels like it. What they shot me in the hip with, earlier this afternoon.

Telstar was a communications satellite ..  a series ... many years ago. There was even a song by that name, which was back when satellites were new. Trelstar is something else.

It's a hormone-suppressant developed over the last few years. It's used where Prostate Cancer is present, and it suppresses the production of the hormone that feeds the cancer. There are others ... I took Lupron in 2008, before all the radiation treatments, which ended January of 2009.

I got the shot in the hip this afternoon for the obvious reason. Yup. My old friend is back.

But, surprise surprise, the PSA only went down to 4.0. That told the doctors that the cancer had gone somewhere else, and scans found it was most likely an enlarged lymph gland in the abdomen. Two months later, after 40 radiation treatments, that problem was solved, with a 25% chance it would end the problem.

So it's back, somewhere. The Trelstar will likely stop it, and the PSA will go to zero. At least that's what we're hoping. That's what history says will happen. And, this is apparently the slowest-growing cancer around, which also adds an interesting twist to the mix.

Chemotherapy .. as this uneducated layman understands it ... is ineffective with prostate cancer for an interesting reason. Chemo works by killing the faster-growing cells, which include most cancers, and also includes hair cells. So .. the hair usually falls out. Again, as I understand it, chemo goes everywhere in the body, but cells are at their weakest when they are dividing. Which is what hair cells do, and which also causes cancer's growth.

So, I think the old adage is true ... most men die with prostate cancer, but not from it. A little like a kid that develops acne, and then gets run over by a truck. He dies with acne, but surely not from it.

Bob, CB and I are praying for you and Mrs. Peg. We love you both, -Karen