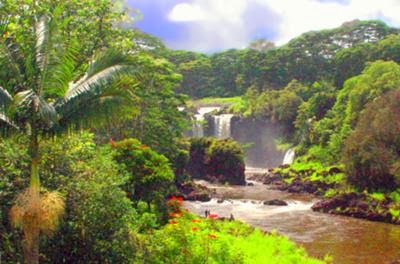 I know that The Garden of Eden probably didn't look like that, but it'll serve the purpose, I guess. That's where I want to start, anyway.

When God created man, and put them in the Garden, it was the most perfect of settings. The earth in its entirety, the most beautiful spot on that earth, and His crowning achievement .... man.

I ask myself how long God made that arrangement, to last. A year? A century? Had Adam & Eve not sinned, would that idyllic arrangement have persisted? Maybe as long as it took to multiply and fill the earth?

I think so. But it's irrelevant, except in one important aspect.

I don't attribute the sin, of man, to God, in any way whatsoever. And if I don't, then I have to think the situation in the Garden could have gone on forever, but for man's sin. So in that sense, I must ask whether man derailed God's plans.

I don't think we can do that.

Fast forward to last week, as I was preparing my Sunday School lesson. I was thinking on the character of God, and I stumbled across the thought that God only promises that there are two things we will definitely have in this life.

Regardless of our faith.

Now, we know that the eventual outcome for the Christian is eternity in a setting far more wonderful than we imagine the Garden of Eden to be. But that's on the other side of death, and it seems that God would prepare us for that, if we're willing to see it.

So ... what's the one thing that will prepare us for death? Reading up on it?

I doubt knowledge would accomplish that.

Focusing on the defeats and heartbreaks of life, so death will seem like a relief?

I doubt God wants that ... it'd be a lousy witness to His sustaining power.


Maybe there's a clue in the Bible. From Matthew 14:32-33, immediately after Jesus had helped Peter up out of the water, and the two of them got into the boat Peter had just stepped out of:

When they got into the boat, the wind ceased.  Then those in the
boat worshiped Him and said, “Truly You are the Son of God!”

These guys had seen Him do plenty of miracles, including feeding a huge crowd with just a boy's snack, just that afternoon. Water had been turned into the best of wines, blind eyes had seen, dead folks had rejoined the living, and Jesus had just gone for a walk on water!

If you'll note, when He made wine out of water, they placed their faith in Him. But when He miraculously saved them, they worshiped Him!

We hear lots & lots of stories about what miracles God does in other places and at other times and to other people, but when Jesus brings you through something in a spectacular fashion, it's up close & personal, and our reaction should be as the guys in the boat's was.

If we keep our focus on Jesus, I figure He will show us how He has saved our bacon many, many times in this life. With its troubles. And maybe the woes of this life are part of His plan to make us so sure of His ability and His intentions, that the specter of death becomes another woe that we're absolutely certain ... way down inside ... He'll bring us through.

And, better for the experience.

And THAT is nowhere more true, than in the last woe we'll face on earth. Which will bring us back to the original premise ... God, living with His people, in the most beautiful, idyllic place imaginable.