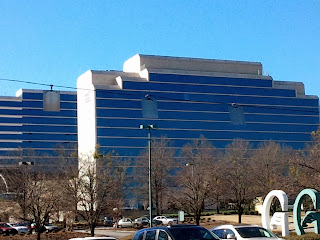 The building in the picture is the Hyatt Regency Hotel, at the Galleria Mall .. a couple miles North of our home. It was built in 1984-1985, as I recall, and I signed the structural beam that "topped out" the building.

The Galleria is a large enclosed mall, spectacular now and even more so, 30 years ago. At the time, I owned Riverchase Business Brokers,  one of my sales personnel had met the developer, and she got us an invitation to attend the Topping-Out ceremony. I suppose 100 or so people signed the beam, which was hoisted up while we were there, and bolted into place.

That all sounds like a big deal, but it really wasn't. Doubly so, for reasons I shall explain in a moment.

This past Sunday, we surmised, in Sunday School, what it would be like to reflect back on your life, as it draws to a close. And what we would really be happiest that we'd done. To prove a point, I told a lot of things I'd done in my life, and I'll recount them (and some others), to make a point.

Don't think I'm boasting ... most of the things were either dumb luck, or a gift from somebody else. So, in no particular order.....

I've done a lot of other stuff, too. I used to go to London every year to work with Lloyd's, and I've been to unforgettable church services in places I never expected it. I've been in 45 states and 25 foreign countries.


And other stuff I can't remember.

NOW: the conclusion. In class, I posed the question "When I'm lying on my deathbed, which one of all those things do you think I'll be happiest that I did?" The answer? None of them.

The things I will be most grateful I got to do? Things like the time I presented the gospel, in 1969, to the young Sunday School class of convicted juvenile felons at the Plainfield (Indiana) Boy's Prison. The time I shared how to be saved with Kori's family as I sat on a couch in their home. The Bible I bought and took to a little girl in Charleston SC. The time we sang praises to God under a huge picture of Lenin in the Pskov (Russia) Community Center .. .and people stood and shouted.

When you're in heaven, seeing remote places on earth won't have made a bit of difference. I imagine we'll be able to see whatever we want, from there. And the insurance programs I thought of and saved? Long since bankrupt and out of business. The businessman I helped? Died many years ago, his business bankrupt. The "topping-out" beam I signed? A couple weeks later, a tar kettle caught fire on an adjoining roof and thoroughly scorched it. I should have learned something right then & there......

Ahh ... but the young lady who prayed in that home, or the 6 juvenile felons who asked Jesus to save them, or the Word of God I gave to that young girl in Charleston, which God said would not return to Him void? Or the people from the USA's former arch enemy, who stood and cheered and praised God, as we sang for them?

Sure am grateful I did those things. I suspect I always will be.

Bob, thank you for this post. I am a few years younger than you and have virtually none of the experiences which you so rightly value above your vocational and leisure activities. Your posts offer hope for me as I see that God is not yet done with you as he continues to speak through your life. You are an encouragement.