The "Days of Noah", Round Two.

Speaking of the end times, Jesus Himself said: 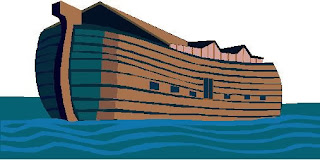 It's indisputable that we're closer to the end than we've ever been .. particularly if you subscribe to pre-trib, pre-mil theology. But even if not, consider the following:

The situation that was found on earth just before the great flood was the result of sinful man engaging in the things sinful man does, absent the control of the Holy Spirit in the lives of unbelievers. And, I think it's true that's going on now, moderated somewhat by the effects of a remnant of believers and the influence they've had on society. While I think that may have had a moderating effect on the rate of "progress", it's obvious now that the natural evil that's in all men, absent the presence of the Holy Spirit in the individual, is becoming more and more prominent.

While it may have been true that the church ... the Ekklesia ... has been intolerant of sinful activity inside or outside the church, campaigning against liquor licenses, lotteries, homosexuals, X-rated movies, dancing, ____________ (insert favorite pet peeve), it's recently been true that evil is now overtly intolerant of righteousness.

One simple example: say what the Bible says about homosexuality, and you get branded a homophobe .. someone who fears homosexuality and/or homosexuals ... or as intolerant people ... or as haters. None of which are true! Suddenly those engaged in things God calls evil, are calling those with a call to righteousness evil, themselves!

The recent blowup over Phil Robertson's personal airing of Biblical truths on a secular magazine, shows us just how deep-seated this phenomenon is, in today's society. The Arts & Entertainment TV Network .. A&E ... has put the star of Duck Dynasty, which is their most popular show, and I imagine their most profitable, on suspension because he publicly agreed with what God said about homosexuality. And anybody with a lick of sense would figure the family isn't going to take that, and the show is apt to come to a screeching halt in short order.

A&E's most profitable show, at that!

Doesn't that sound just like what would have been the case at the time of Noah, if they'd had electricity and TV networks and reality shows, all those years ago?

God didn't promise that lifting up great music or care groups or quiet times or slick marketing or Christian TV ... in and of itself ... or lecturing on the evils of homosexuality, drunkenness, et al, would draw people to the church. God said if we'd lift up Jesus, God Himself would handle the drawing.

Make no mistake about it: the evil in the world is the result of sin. Blaming it on the church, and its shortcomings, is like blaming diseases on well people.  But the one and only thing God said was the Power of God for salvation, is the Gospel of Jesus Christ. And repentance over sin, and not just societally rejecting one sin or another.

Regardless of TV's de facto censorship.

Robertson's comments regarding homosexuality were crude, and utilized some descriptive language that led me to believe his perspective on homosexuality was more about physiology, with his Christian perspective tagged on as an afterthought. The comments on social media--specifically that he was suspended because of his Christian view of homosexuality--are not accurate. He also made some very insensitive remarks pontificating on the relative happiness of African Americans as it relates to their receipt of welfare.

Jesus' references in the NT to the coming of the Son of Man focused on the destruction of the Temple and the end of its age, which he predicted and in which the context of his discourse was fixed by his statement to his disciples that some of them would not see death until what he spoke of had come to pass. I'm not going to argue with anyone about the moral decay and decline that is taking place in the United States, but I don't think that's specifically what the Bible's writers were thinking about when they wrote those passages, including what Jesus said. There is a whole rest of the world out there, one over which the gospel of Jesus Christ is advancing and reaching people as it never has done before, and in a way that has never been seen in the US. I think it was Peter who said that the return of Christ was delayed only in order that as many as possible might be saved, and I don't think he meant Americans exclusively.

And here I was, fixin' to write a post about this.

Plain and simple, I agree with his stand on homosexuality, but if he'd shown up in my Sunday School class, saying the explicit things he did, I'd have stopped him and asked him to leave. On top of that, discussing Spiritual matters with the secular media is futile, senseless, and dangerous.

I didn't read all the things he said about black people and welfare, but Dwight McKissic didn't seem upset over it.

I think I'd have to disagree with Dwight on this one. He's the only African American I know that isn't outraged over it.

I do agree with his stand on homosexuality, and his right to say how he feels. But, as I said in my blog, I'm sure A&E has him under contract, has paid him a fortune, and has a right to determine the image that he projects. That's a hazard of taking your normal everyday life and turning it into reality television that makes a lot of money.