It's a HOLIDAY SEASON, OK? 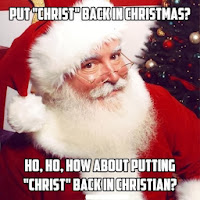 I had occasion to see my Audiologist yesterday; the one who sold me my hearing aids a couple years ago. During the course of the conversation, she mentioned that her previous client, the one leaving as I came in, was a referral from a friend.

It seems that the friend had visited this store some time ago, and after conducting all her tests, the audiologist said she really didn't have anything that would have helped his hearing loss, so she didn't sell him anything. This man told his friend about it, remarking that anybody that honest was the sort of person you'd want to do business with, if you ever did need hearing aids.

My audiologist explained that she'd told him "I'm an audiologist, but I'm a born-again audiologist". That prompted her to explain that the company had no rule against "Christmas", or "Christian". But she said "I wouldn't want to offend anybody".

Wow. There's the money quote. She doesn't want to even run a risk of offending someone she's talking to. So if someone of the Jewish or Islamic or Hindu or Buddhist faith were in a discussion with her about her business, she wouldn't want to offend them.

Hmm. What a unique idea. Not demanding our own rights to say whatever we want to someone else.

I also hasten to add that, when she's in a discussion about faith, this is one devoted and solid Christian. And if one of those adherents to another faith .. or no faith at all .. broach the subject, she'd be a witnessing machine.

I doubt that she has a "Keep Christ in Christmas" sticker on her car. You don't have to adorn your possessions in order to do that!

Which brings me to the Holiday Season itself. There's no doubt that this is a Holiday Season for everybody. Everybody decorates, gives gifts, has open houses, makes candy, and does all the other things we do, this time of year. That spans across all faiths ... I've had Jewish friends send me Christmas cards, including even a couple from Tel Aviv, Israel that I happened to meet on a train between NYC and Philadelphia ... and isn't just "our" celebration.

And I'd never be so naive as to think that everyone who says "Merry Christmas" or puts up a tree, or buys presents, or puts lights on the outside of their houses, is a born-again follower of Jesus, anyway.

As to keeping Christ in Christmas, that's not Walmart's or Costco's or Publix' or Hallmark's business. Their business is providing goods and services needed by the people, to the people. It' MY responsibility and YOUR responsibility to keep Jesus in the season, and I'd imagine we'd do that by wishing well to all people during this time of year.

It goes way beyond what we call the season.

Check the picture up above. Let's keep Christ first and foremost in "Christian", and we'd do well to emulate the kindness He showed to people. He is supposed to have taken up residence in us, you know.

Let's show the Spirit I saw in my audiologist, OK? Unless you run into a Pharisee actively opposing Jesus, I'd say.