Farewell to Propriety, As I've Known It 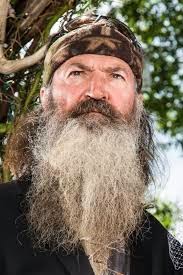 When I was in Grade School, there was a Report Card grade in an interesting column, which I haven't heard much about, lately. It was titled "Deportment".

DEPORTMENT: the way that a person behaves, stands, and moves especially in a formal situation;  the manner in which one conducts oneself :  behavior

With reference to the entire Phil Robertson dust-up that's been hogging the media, and blogdom, lately, I have a couple observations. Herewith:

His description of homosexual sex was crude, tasteless, and rude ... think about having a group of church friends over and hearing or seeing what he said, quoted in the media.

If Mr. Robertson had somehow wandered into our Sunday School Class, and said any of the things he said in his interview with GQ, I would have stopped him and asked him to leave. And with all the stink about his suspension from A&E, and the Duck Dynasty Program, I imagine I'll be mentioning this to my class, tomorrow morning.

I heard a long time ago, when TV began to become more explicit, that one of the most beautiful love stories ever was Romeo and Juliet. Yet there's no bedroom scene, no mention of sex, and no reference to anyone's private parts.

Were I the producer of Duck Dynasty, I'd have done the same thing he did. Not over his views on homosexuality, but rather on the crudeness and lack of good taste, which he modeled.

Now .. the surprising thing about this is that I have not seen anyone complain about the crudeness and inappropriateness of what he said about certain sexual practices. I have to believe that's a reflection on society, itself, and tragically, I have heard only silence on that topic from among Christian bloggers, laity and clergy alike.

I wrote about what I believe Christian behavior should be, some time ago, here.

I believe we're not only to teach the Bible, but we're to model good Christian behavior, Godliness, Christ-likeness, and values which make it evident in our works that we are to be like that lamp on a lampstand. To me, Phil's off-topic remarks were objectionable in the extreme.

I suppose the really telling thing about this was that, when I shared my ideas with Peg over lunch, she said "But that's just society today".

There's no doubt the pressures of the world, of society, have been increasing lately. And I'm afraid that we are, collectively, not keeping pace. Enough so that, when Phil Robertson speaks a Biblical truth about homosexuality, it'll get him thrown off the air, but when he speaks with unnecessarily crudity and tastelessness, no one seems to care.

Several years ago, I took my church youth group from Kentucky to Savannah, Georgia on a mission trip. We had to evacuate on the second day because of a hurricane, and then we got caught in Forsythe, Georgia when the first floor of the hotel we were staying at flooded. Fortunately, we were on the second floor. We had parked our two vans on the far side of the parking lot, because one of them was hauling a trailer, and the water stopped inches short of flooding that side of the lot. I made the statement to the press that we considered ourselves blessed by God because of that. Wow. Did that cause a stir! Did we think that God spared us because we were believers? Did those who lost vehicles, other belongings and homes in the flooding deserve it because they weren't? Did we believe that God put us on the second floor because he foresaw this event happening? We were selected for the interview, btw, just because we had been spotted by the news crew on the balcony of the second floor and they'd seen the church van in the lot.

When you have celebrity status, like Mr. Robertson does, your free speech isn't curtailed by that. But your level of responsibility for what you say becomes much greater. It is tough to maintain an image that keeps selling your program, your books, and all the products off which you make your fortune, and communicate clearly about your life, and especially about your faith.

Lee made good choices. They may have been led to those choices--and I like to think they were. As a result he was blessed.

Seems good to me.

Indeed he did. For those with the Spiritual eyes to see, it all makes sense. For the natural man, well, there just has to be something besides God to credit it to, you know.

I spent 4 years on our city council here, and I had enough episodes to know for sure the Media oft times misses the point, and for sure they do in Spiritual matters.

Thanks for commenting, gentlemen.