Strict//EN" "http://www.w3.org/TR/xhtml1/DTD/xhtml1-strict.dtd"> EAGLES' REST: AT THE OPPOSITE ENDS OF INFINITY

AT THE OPPOSITE ENDS OF INFINITY 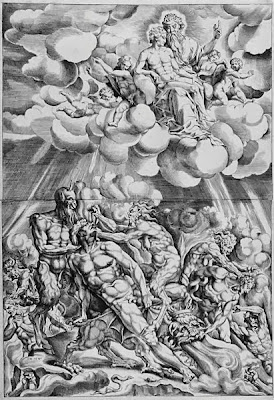 Several things have had me pondering Scripture lately, especially as it relates to Heaven and hell. They've led me to some speculative conclusions that I thought I'd share, here.

First premise: Man’s mind is finite. Man cannot, therefore, truly comprehend the infinite. Just try to comprehend light traveling a million light years, before it strikes our eyes. Keep in mind, one light year is how far light travels in a year, going 186,285 miles every second.

Personally, my mind kind of shuts down when I try to grasp that.

Perhaps this is why God wouldn't allow Moses to see Him ... but, rather, had him hide in a cave and then let him see God’s back. Seeing God, while we are finite human beings, would be more than we could bear.

Third premise: God wanted to reveal the promise of Heaven, and warn us of the terror of hell. He would, therefore, tell us about them, in terms we could comprehend.

Fourth premise: Our connection with fellow Christians, here, is a Spiritual one. That makes sense, in light of the truth that we are really Spiritual beings, having a temporary human experience, as opposed to human beings having Spiritual experiences. And Romans 8:16 & 17 seem to confirm that.

Fifth premise: one of the results of sin is that we humans get tired of everything. Peg and I have traveled a lot; enough so that there’s no place we want to go (as in vacationing….) badly enough to travel to get there. We’ve given away a lot of air-miles, in fact.

Consider it this way: think of the first really great vacation you ever took. When you first got there, it was probably thrilling in the extreme. But after a week or two, you were probably ready to go home.

Same thing for your first house. Today, it’s likely just your house, but it was something else the day you moved in.

That’s all because we get used to things, and have to be reminded of what we have, etc. Every now and then I have to pause as I’m driving home through our subdivision, to remind myself how beautiful it is (winding streets, beautiful homes, heavily forested, etc.).

If we accept all these thoughts, then two conclusions jump out at me. The first is that there will be a huge change in me … the real me, inside … when I get to heaven. Otherwise, there’s a possibility (in my mind) that I would get tired of it, there. Since that would make it less than Heaven, I don’t think that’s possible.

The second conclusion is that, in our finite humanness, we cannot comprehend the true wonder of Heaven, or the true horror of hell. But God, despite that inability on our part, wanted to tell us that Heaven was great and hell was awful, anyway. So how would He do that? By telling us in the most beautiful terms … descriptions, analogies, comparisons … what Heaven is like, and similarly in the most awful terms, how bad hell is.

So, 2000 years ago, how would He say that? I think there’s a good possibility that He’d use, as a frame of reference, what people then would have seen as the most beautiful, awesome, precious things they could imagine. Things like gold, silver, precious stones and the like.

Similarly, how would He describe hell? Perhaps, most simply, in the most terrible terms they could comprehend. Like a lake of fire.

I doubt that, 2000 years ago, He would have described Heaven in terms of free world-wide Wi-Fi, Ferraris and Autobahns for everybody, or lifetime airline free passes. Nor would He have compared hell to dying of AIDS, the Chinese death of 10,000 cuts, or waterboarding.

Before the last conclusion, let me say I have no idea the substance of Heaven, or of hell. No idea at all. Heaven may well be the kind of streets and walls and gates that God said. And hell may be a real lake, burning with an eternal fire. Or not … but consider the following alternative:

We die, and suddenly we are in Heaven. The wait is over, there’s no doubt any more. Our faith was genuine, it’s all true, and there’s no sinful flesh to cloud things. No more glass to peer through, darkly. I cannot even begin to imagine the tremendous thrill that will be.

PLUS: Every investment we made in any soul, while here on earth, will pay the eternal dividend of fellowship in every sort of activity … including worship … that we ever experience there. And we would never, ever, get used to it! It would never, ever, fade. We would feel and appreciate that for eternity!

Conversely, the lost one dies, and stands in hell. Whatever its form and substance is. With full realization of A) He didn’t have to end up there, B) every misdeed he ever committed, every wrong he ever did, gnawing at his conscience (now free of flesh….), and C) the knowledge that he will spend eternity there. That the first flash of guilt and wretchedness will never, ever end. He will feel that, for eternity!

PLUS: Since he had no spiritual connection with anyone here, he will be alone. For eternity!