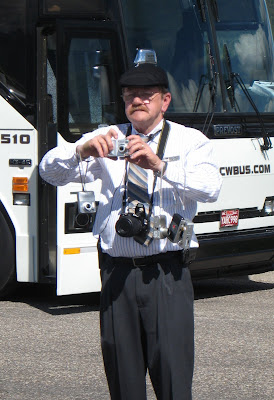 Folks, meet Jay Gunsolley. Jay is a resident of Eugene, Oregon, has ridden his Harley to Sturgis, and was the bus driver for our bus tour to Yellowstone, the Grand Tetons, the Snake River Canyon, and more National Forests and waterfalls and canyons than I can count.

I took 2,960 pictures on the bus-tour part of the trip, if that'll tell you something.

Simply put, Jay was terrific. If the windows had all been blacked out, and we'd never seen any scenery outside the bus, it would have been a fun 6 days, regardless! He was just that entertaining, professional, informative, and considerate.

Above all, Considerate. He'd put a towel on the bottom step of the bus whenever we'd stop, so that it'd clean our feet whenever we got back on; he'd then take the towel and wipe the steps off so they'd be clean for us and, as he said, we "wouldn't have to look at a dirty bus". Every night he'd wash the bus and clean all the windows, as did the drivers of the 2 other buses.

As Jay said more than once, "Hey .. this is YOUR VACATION!"

He also told us what a good group we were, and what a delight it was to be our driver and guide on the tour. Now I know that some folks might say things like that, just to be saying them, but his demeanor when he said it, and during our entire time together, leaves no doubt in my mind, whatsoever, that he meant every word he said.

Entertaining: he had a constant stream of witty asides, jokes, all of which were clean and OK for your 7-year-old to hear. He even passed the microphone around .. once he'd gotten to know us .. and we all told jokes running down the road.

Informative: he kept us constantly informed of where we were, the wildlife, and what was really interesting about where we were. Example; one time mid-Yellowstone, we had a brief period of rain: he told us that good part about that was it'd bring out the animals. And it did. We saw, altogether, deer, elk, bison, and bald eagles. Also hawks, ravens, all of which Jay spotted before anybody else.

His conduct of the tour caused the group on the bus .. 37 of us .. to "bond" (I don't like that word, but it applies) as I doubt many bus tourists do. At one stop, at an overlook before the Grand Teton Mountains, the Driver/Leader in Bus #1 .. who headed up the tour, as it were .. suggested we take a group photo. Jay said we had to decide if we wanted the whole group .. all 3 buses .. 141 people .. or just our bus.

The "just us" shout was deafening. Jay laughed, and said he thought so.

What's going on in the photo of him was that, at the stop I just mentioned, Jay asked for all our cameras, hung them all over his arms, and stood out in the middle of the parking lot and snapped pictures of us. The photo above was the second round of cameras, in fact; he'd given my camera back to me and I took a picture of him taking pictures of us.

Some time back, I did a blog post about how some folks at the St. Vincent Cancer Center doing their jobs well .. making it a good experience .. made me a better husband, father, and even a better Sunday School Teacher. Well, I think this applies to Jay, too. Turning what might have been a tedious bus ride and recitation, into 6 days of fun, laughter, wonderment, awe, and fellowship, will undoubtedly make me better at what I'm supposed to be doing around here. And I told him just that, including the Spiritual aspects of being a good bus driver and tour guide.

I will put up some more posts about the trip, with photos, and will also put up some albums on Facebook, as soon as I sort through and pick out those I want to use, from among the 4,828 pictures from the whole trip. But I thought the first post upon our return, ought to be about Jay, and his impact on the trip. After all, a lot of those photos .. we sat in the front seats .. were through his side of the windshield. You can see his reflection in a lot of them, and while photographers might not like that, I'm leaving those photos in the deal.

Shouldn't our lives be reflections, themselves?