Maybe Our Best Performance of the Trip 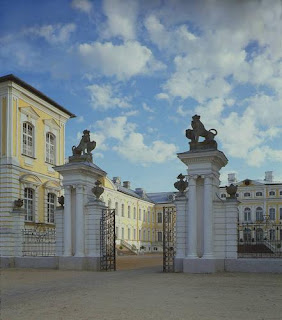 In 1997, a group from Living Word Church, and First Baptist Church .. both of Pelham, Alabama .. went to Russia and Latvia on a mission trip. When in Bauska, we toured the Palace Rundale, located near there.

When we got to the second floor ballroom, there was a piano there. Someone said we ought to sing the song we'd learned in Russian, so after they played the beginning chord on the keys, we gathered and sang it.

Last week, I happened upon the VHS Tape I'd made, from the video that Pastor Truitt Murphy shot while on the trip. I watched it, and decided to put this up in order to, among other things, honor Pastor Truitt, who died a few years ago. Had it not been for his approaching Sam Neugent, our worship leader at the time, during a community Thanksgiving service in 1996, we'd never have made this trip.

The song is "I Love You, Lord..", and I don't think we ever did it any better than that.

Thanks, Paul. We also did "Come, Let Us Bow Down" in English, but owing to an anomaly in my VHS-DVD converter, it'll take a but of fiddling to get that one done.

Bob, that was truly beautiful and Christ-honoring. I don't speak Russian, but the reverence came through in the song.

Thank you so much for sharing that.
:)

The words were a loose Russian interpretation of

"I love you Lord, and I lift my voice

To worship you, oh my soul, rejoice

Take joy, my King, in what You hear

May it be a sweet, sweet sound, in your ears"