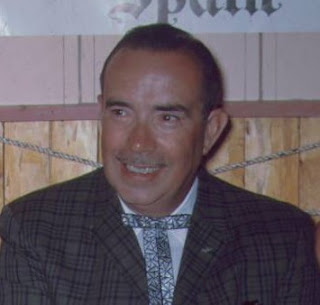 That's my dad, there, on the right. The picture was taken when he and Mom were on vacation in Colorado in 1962 .. which is kind of a long time ago .. but that's how I remember Dad.

That's who I see when I think of him.

He was an exceptional guy. For starters, when I was about 9 years old and had been struck by a real dread of dying .. I think that was my arrival at the "age of accountability" .. he's the one who noticed my distress, asked me about it, and reminded me of "what you heard in Bible School .. if you believe in Jesus, when you die, you go to heaven".
It was that moment at which I was saved.

But he did a lot more than that. First of all, my dominant "action shot" in my mind, of Dad, is his arrival at home from work. Mom would be on the lookout for him, as he always got home about 6, and she'd meet him at the front door. He'd grab her in a big hug, plant a smooch on her, and as he wrapped his arms around her, he'd play "patty cake" on her fanny with both hands. Now, I've heard that the most important thing a father can to for his kids (secularly speaking) is to love their mother, and Dad certainly did that in a visible way.

Second, he was fiercely protective of his family. Once, when a hobo tried to get through the back screen door, to get at Mom, Dad came roaring up out of the basement, ax in hand, putting the hobo to immediate (and frantic) flight. Another time, when a somewhat odd cousin of my (future) sister-in-law started harassing my brother, Dad looked him up and told him face-to-face that, if he took one more step to harass my brother, Dad would make his sole task in life to make him .. the cousin .. miserable.

Dad must have been a good salesman. The cousin never again caused any trouble.

Then there was the episode with me and Purdue. I'd breezed through High School on the honor roll, without any real study habits. When I went away to Purdue, I hit the inevitable reality and flunked out big time. When the "Letter To The Parents" hit the house, Dad suddenly cropped up at the dorm one evening and requested my presence in the car. There, he said he knew what had happened, that Mom was devastated, but they had decided that they would put the year behind us, I would go back home right then, and would enroll at Butler University that fall, where I could live at home and they could guarantee that I would do the studying necessary to prepare myself for a career.

True to his word, the topic never came up again, and was, I suppose, the first real encounter with the desperate need for, and the giving of, the forgiveness we all need as beings made in the image of God.

Dad was a man who did things the right way. I learned more from him than I can recall, but then I've heard that your education consists of what you remember after you forgot what you learned. I suppose that's true because those things make up who you are, and not just what you know. In that sense, what I am today (again, humanly speaking), I owe to my Father, from whom I learned so much, when I didn't even know I was learning.

One of the accomplishments in my life is, during their sunset years, Dad was proud of me. My career in Insurance was rather Horatio Alger-ish; I'd started as a Mailboy at an insurance company and ended up traveling all over the country managing a National Sales Force, conducting meetings and lecturing on insurance sales.
Then I started my own business and he was really pleased to see the measure of success God sent my way.

One of the things which brings great satisfaction to me is that my own family's regularity in church attendance and activity, even on those Sundays when they were in town visiting with us, was instrumental in leading them back into church; eventually, when they moved to Birmingham (from Clearwater) to be close to family, they joined FBC Pelham. That served Mom quite well after Dad had died; her Sunday School class did all the things for which a good Sunday School class is usually noted.
That was in the early 1980's, and I still have the Sunday morning Bulletin announcing their joining of FBC Pelham!

I was the world's biggest Daddy's boy. I guess I still am, and there's no way I could let another Father's Day pass without doing something to explain why, in large measure, I'm as I am today.

Thanks, Dad. I'd have written more, but I think Blogger has a limit on the length of posts, and I'm sure I could easily exceed it.

You certainly left me with enough to do that.

It thrills me that you are able to report such great blessing.

It makes me sad that I cannot write such a glowing report about my father.

Yes but doesn't that put the emphasis on a God Who loves His children? I mean, we have no common background as to earthly parents, so that which brought us to the Master's feet must, of necessity, not be earthly parents. It must be a choosing God.

And, although we suffered the same sickness, God wrote different prescriptions to bring us to the same state of health.

Somebody ought to shout "praise God!"