When International News Gets Personal 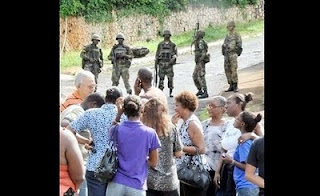 The picture there shows police and citizens standing around after a prior night's fierce gun battle. The subject of the battle was Christopher "Dudus" Coke, a reported drug baron and somewhat of a "Robin Hood" character, from the Tivoli Gardens section of Kingston, Jamaica. In fact, if I'm not mistaken, that distinctive rock wall in the background is one I've seen many times, as it's at the intersection of Sterling Castle Heights Road, and Red Hills Road. It's under half a mile down the hill from Red Hills Baptist Church, where we've been many times.

The name of the picture, which I copied from the Jamaica Gleaner article about the battle, is "SterlingCastleN20100527NG.jpg"!

My good friends, the Bethunes, live on Sterling Castle Heights Road. So that would e scary enough. But check the chilling email I received from Keri-Ann a couple nights ago ... here's what she said:

It's not enough that I know her .. she's a dear friend, and has been since she was 10 years old. I blogged about her, in fact, here.

Needless to say, I prayed.

There was nothing in the news about anyone I know being killed or injured, so I'm trusting that God protected Keri-Ann and her family. But I know that, whenever I read news reports about violence anywhere, it's going to be a little more real to me, knowing that there are people there who were experiencing what Keri-Ann did, the night violence came to Sterling Castle Heights.

I hope you hear good news soon, Bob. Those poor people have enough trials to endure without being hostages in a testosterone festival. All my best.