I was sitting around watching TV one evening and saw this commercial for the Classic 500 Roadster. It was the most beautiful car I'd ever seen, so I ordered a brochure from the 800 number.

When it came, I got it from the mailbox and looked it over, unbeknown to Peg. But one evening I was sitting looking at it (lusting after it might be a more apt term) and Peg walked in and asked what it was. I said something like "Oh ... I got this brochure about building this car, but I don't think I'll ever be able to do that....". She said:

"You're not getting any younger. Just sell something to pay for it."

So I ran an ad in the paper the next day, sold my Taurus SHO, and went to Miami and bought the kit to build the car. There follow a few pictures of my stint as a car builder.

First I had to buy a Camaro, to use as a donor car. The Kit called for the front stub-frame, engine & transmission, driveshaft (shortened), rear end assembly, steering gear, wiring harness, and instrument panel. So I found one: 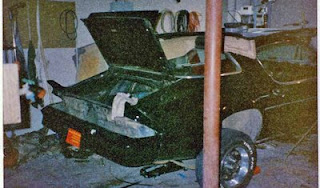 After I'd gotten all the stuff taken off, I called a salvage yard to come and get the hulk that remained. Then I cleaned and painted the front frame and rear axles and laid them out to install the main frame that Classic sold me: 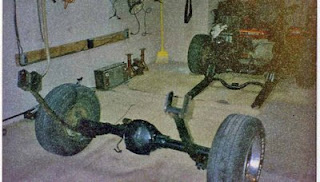 Then I plugged the front frame into the new rear section, put on the rear axle assembly, and bolted in the motor: 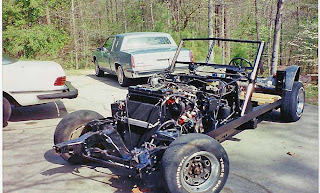 Not having anything else to do, I then started hanging body panels on the rolling chassis, using a combination of bolts, nuts, screws, and glue (no .. really .. Industrial-Strength adhesive): 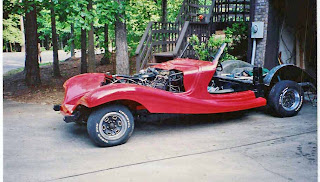 After I got all the fiberglass glued on, just before cutting out and installing all the plastic interior pieces and carpet, I upholstered the Dodge Dart seat pieces they sent me, and put the finished seat in: 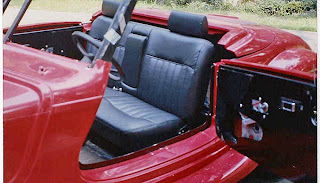 Then, since the company had gone bankrupt before they sent me all the pieces, I had a grille shell fabricated from stainless steel, rounded up some Kenworth headlights, VW turn signals, braided toilet supply lines to run the wires in, some aircraft landing lights for the cowl (I could read a newspaper at 100 yards....), Radio Shack CB antenna ball-mounts, and truck accessory taillights, and ... some weeks later ..... VOILA!......... 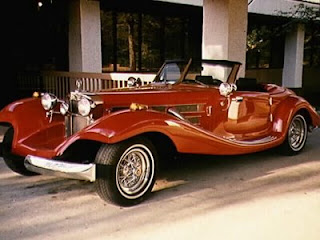 It was, as you can see, drop-dead gorgeous. And as it happened, the Camaro I bought had just had a rebuilt z28 motor put in it, so the Roadster ran shall we say smartly.

It was fun to build, and I drove it a lot in parades, etc. What really cranked my tractor was sitting at a stoplight, next to some kid in Daddy's Mustang, with the kids girlfriend hanging out the window eyeballing this old man's car.

Probably the most interesting change I made to it was after 6 or 7 years ... the last 19 months of which I'd driven it 89 miles. I sent a few email messages, swapped a few photos with Carl Cooper ... Helicopter Pilot for the Graham County NC Sheriff's Department .. and after a quick one-day trip to Tennessee, the car now looked like this: 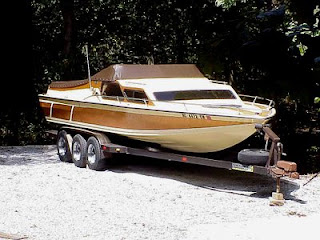 Yeah .. I 'd never had a boat, and when Carl sent me a picture of his, we worked out a trade. I'd sent a picture of the car to 3 different ads in the Boat Trader, who had boats for sale for about what I had in the Roadster. Carl sent a pic of the boat .. a 1979 Ranger Excalibur .. and said he'd like to swap.

ps: After several happy years of boat ownership, I sold it to my older son, Brian. He still has it, and uses it when our church group .. informally known as the River Rats ... goes camping; our church kids have probably ridden as many miles being towed by it, as they've spent sleeping on the church bus.

You do inspire me, Bob... you really do.

Bob,
Now I know why I feel like I know you! How did you part with that car. I covet them both. You oughtn't to temp my "old man" man like that :)

Phil: So go build something already!

John: If you'd seen the car, it'd be lust, not covetousness. It's also been said that the two happiest days in a man's life are (A) the day he gets his boat, and (B) the day he gets RID OF his boat.

(Incidentally I saw a story online somewhere about a guy that sells "phony classic cars" .. like my car (which was a replica of a 1934 Mercedes 500K like Hitler used to ride around in .. the 4-door version). And behind him in the picture were several cars for sale, including a yellow one just like mine. I even saw a white on like it in St. Maarten a few years ago.