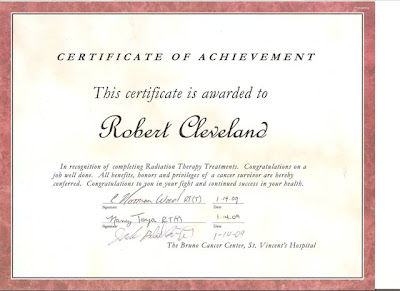 ....for disrobing to my waist (from the ground up...), lying on a table for 10 to 20 minutes, and getting irradiated by 6 million volts? For 38 more-or-less consecutive weekdays?

Yup, and it was a really nice thing, too.

In case you can't read it, it's a Congratulatory Certificate for having completed my course of radiation treatments at St. Vincent's Hospital as of this past Wednesday. And it kind of capped off what had been germinating in my mind as a descriptive story about my Radiation Therapist, the Reception Clerk ... I don't know her real title, and the guy in charge of parking the cars.

I'm big into Spiritual Gifts, and subscribe to Ken Hemphill's definition that they're an individualized manifestation of God's grace, in the believer, that enables the believer to do his part in the Kingdom work. And these 3 all did just that.

Let me tell you a bit about these folks. First, there's Norman Wood. 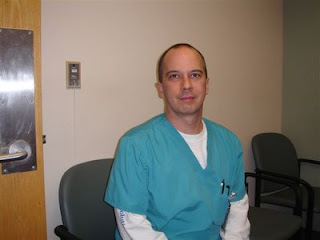 He's the radiation therapist, and when my surgeon said I should talk to an oncologist about the possibility of radiation, our son Brian ... who has a lot of experience in the Birmingham medical community ... said if I went ahead with radiation therapy, I should try and get Norman. By chance (yeh, right), that's the Therapist that my Radiological Oncologist uses, so I didn't even have to try.

Norman was a delight to work with. Has a great sense of humor, a way of putting you at ease .. not easy with a 70 year old guy gettin' somewhat nekkid with others around .. and is extremely respectful in every way I can think. He always called me Mr., even though we've gone to church together for more years than I can count.

Such an upbeat, positive guy, despite the fact that he himself has MS .. thankfully being pretty well controlled right now.

One day, the computers in his control computer outside, and in the machine itself, somehow became unsynchronized, and the machine shut down mid-treatment. No problem, they just made up for the shortfall with the 38th treatment; Norm's comment when he came in the room to tell me was "Well .. we keep the machine plugged in to the same outlet as the coffemaker, and somebody just, you know, unplugged the wrong one." Last Wednesday, my last day there, his remark ... to one of the other attendants ... was "We're getting enough practice, I think we'll start turning this thing on, tomorrow". I tell you, their humor ... I chipped in some, of course ... made the sessions pleasant things to go through.

Then there's Benita. She's the lady at the front desk, where I signed in. 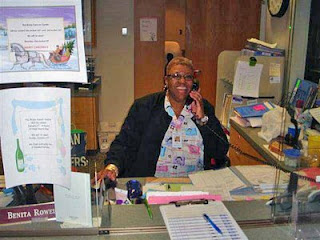 It took 2 days for her to remember me; thereafter, when I'd walk in, she'd punch the computer a bit (which notified Norm I was there), and by the time I signed in and got to the changing booth to slip off the trousers and put on the gown, Norm would usually meet me there. I don't think I waited 45 minutes total, for all 38 treatments. And, Benita was good-humored and jovial and a real pleasure to see. We laughed a lot (look at her expression.....).

Then there was Thomas. Unfortunately, I didn't get his picture, but he's the guy who's in charge of parking the cars in the little cul-de-sac in front of the Cancer Center at St. Vincent's. He, too, remembered us after 3 or 4 days, and also remembered we wouldn't be there very long. It's a free Valet Parking deal, but most of the days, he'd have the car right there in the area so we cold just get in and leave.

A) Gifts are given to build up the body for the work of service. There is absolutely no doubt in my mind that I was a better teacher in Sunday School, and a better witness to God's marvelous grace in general, because those folks (and all the rest at St. V's) were so positive and nice to be around. I'll actually miss the treatments; it's really nice to be around fellow believers and interact with them every day. So their abilities to make me feel better about the treatment contributed to my work in the Kingdom. In a big way. And I'm sure they contribute in lots of other ways, with people I don't even know, too.

B) A forced time of 20 minutes (first 26 sessions) to 10 minutes (last 12) of lying still on a table gives you a lot of time to think, and stuff. The first day, I counted seconds; the second day and every day since, I've pictured myself standing before people and teaching or testifying. And, during that time I formulated some plans for teaching on Spiritual Gifts, now that Ken Hemphill's excellent study course is out of print.

I have to say God has done some remarkable stuff in my mind and soul, plus it's nice when you have to stay put and meditate, and can't get up and go investigate that noise, fix the leak in the shower, or get another cup of coffee.

C) For this one, see the photo which follows. 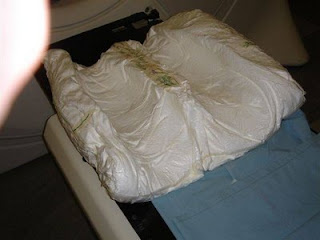 To be sure they were starting in the same place very day, they had to position me on the table, very carefully. To make sure I started close, they'd made up this "mold" of the back of my legs; it plugged into the table and when I lay down with my knees and calves in the mold, alignment was a lot simpler. When I asked what they were going to do with it when I was done, Norm told me how the thing worked.

If you've ever gotten ground coffee in one of those metal-foil bricks, you probably know that they form the coffee into that shape, in a squarish foil package, and then draw a vacuum on it. That makes it, literally, hard as a brick. Well, same deal with the leg form, but in this case, it's little plastic pellets. I remember lying on a table and having them form that stuff around me, but I figured it was foam, which hardened. It wasn't; it was just the pellets, and I recall the mold being done when I got up off the table. Norm said, when I left, they'd just let air back into the package, change the label, and use it for the next task for which it was needed.

SO ... what's that got to do with anything? Simple ... we can be like hi-expansion foam, and take a certain shape in the Kingdom, and never change. Or, we can be like that plastic bag of pellets ... be formed into a usable shape and be used as long as we're "needed" for a task; then, when the task is done, we can let the Holy Spirit breathe a new form into us, and discover the wonderful universality of God's ability to use us beyond our biggest expectations.

I learned a lot, lying there with nothing else to do.

So here's the folks at the Joseph S. & Theresa Bruno Cancer Center, of St. Vincent's Hospital in Birmingham, Alabama. All those times you said "God bless you" .. and there were more than I can remember ... He did just that.

Bob,
God has a way of showing himself when we don't always expect. Sounds to me like these people are "living what they believe". James 1:22 (King James Version)

22But be ye doers of the word, and not hearers only, deceiving your own selves.

I had 5 rounds of radiation just between Christmas and New Years. At UAB - you do get attached to those folks who see you at your most...uhm...how to put this? Your most vulnerable.

They are, indeed, special.
~Mad(elyn) in Alabama

Congratulations on finishing your Radiation treatments. I hope you get to feeling better soon.

I am praying for your complete healing...and thanks for the account....