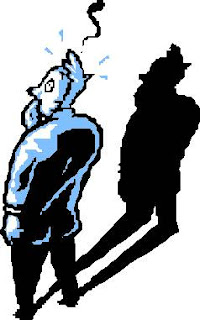 Had breakfast with a fellow churchmember the other day. He said he'd been missing church some, lately, as he felt he could read the bible and pray as well at home as he could at church. I suppose that's possible, but we can't do most of the other stuff that God tells us He saved us for, if we don't go assemble with some others. Like in church.

He also said that his wife wanted him to go with her to church, but he'd preferred to stay at home some, in the past couple months. That sparked a discussion of the husband's role, and duties, in the family.

My belief is that the husband is, indeed, the head of the wife and the house, as the Bible says. Even today, with today's mindsets, woman's lib, and all the rest. BUT ... I hasten to add, the Bible also says we're to love our wives as Christ loved the church. So, if we want in on the blessings, we're going to have to lead our household as Jesus leads the church.

Personal preferences can really mess up a church. Worship styles, order of service (we once had a big stink at FBC when the offering was moved to the end of the service), colors, all those things and many others can get folks arguing and even lead to church splits. I had a good friend who told me of a church split in a good-sized SBC church when they had a special Sunday afternoon prayer meeting, to pray over one of their most beloved Deacons. Some of the congregants didn't believe in divine healing, and when the Deacon's advanced Stage IV cancer disappeared after the prayer meeting (much to the puzzlement of his doctors), it split the church!

We can clearly see His role as the Head, the redeemer, the sustainer, of the church. Yet it was clearly sacrificial, up to and including death on the cross. And just the other day I noticed something God said, which I always knew, but just realized a few days ago:

Philippians 2:6-8: (speaking of Jesus...) Who, being in very nature God, did not consider equality with God something to be grasped, but made himself nothing, taking the very nature of a servant, being made in human likeness. And being found in appearance as a man, he humbled himself and became obedient to death-- even death on a cross! (NIV)

God Himself, becomes flesh. That seems extremely humbling. But that wasn't far enough; when He was found "in appearance as a man", He humbled Himself even further, becoming a Servant to all, and ultimately a Sacrifice.

Talk about humble. Talk about setting aside your own wants. Your own preferences.

BUT .. the interesting thing ... the following verses:

Philippians 2:9-10: Therefore God exalted him to the highest place and gave him the name that is above every name, that at the name of Jesus every knee should bow, in heaven and on earth and under the earth...(NIV)

I was taught that, whenever I saw "therefore" in scripture, I should find out what it's there for. In this case, it illuminates the fact the fact that it was Jesus' obedience, to His Father's desires, that resulted in His receiving that Name above all Names.

While Jesus may be a common name in Hispanic culture, when you're referring to God's Son, it takes on earth-shaking meaning, promise, and power.

Adopting God's preferences over the personal. Sacrificing the personal in deference to the Person of God. Setting aside personal desires for the good of the Body. Powerful things in Jesus' life.

I wonder if they aren't just as powerful in our lives.

The husband IS indeed the head of the wife and the house. Your wife and kids ARE following you, whether you are leading them or not. The question is, where are you leading them?

Generally true, but not always. One of the finest pastors I ever had saw his older son grow up into homosexuality.

That wasn't following his dad, but rather his dad failed to make sure that didn't happen.

Great post. We must let go of ourselves and do so because we love God.

Letting you Know I am Reading...and this one was very good.
As a mom...I get tired sometimes of putting just about everything in front of me..I'm saying SOMETIMES...but looking at it in light of God's sacrifice..it becomes nothing.
thanks

Thanks for the comment.Such, is the reason why I blog.

Bob--I know I'm a few days late reading this, but it blessed me more than I can tell you. What a great picture of Jesus.

It also reminds me of how far short I fall of being like Him.

Thanks for stopping and for the kind words.

I have been like that fellow you started out with, skipping church for stretches.
Yet, this last week I was feeling a bit down, and fellowshipping with folks yesterday was the best thing to happen to me all week. Being reminded of His sacrifice really does shrink our own ills.

One of the best letters I've ever received.

Thanks for making my day.

Charles Spurgeon once told a bride, "The apostle said the scripture says the man is the head; don't you try to be the head. You be the neck. The neck determines which way the head moves."