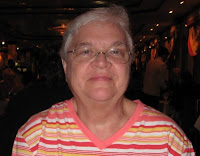 This is a photo of Peg .. my wife of 49 years ... my sweetheart ... you know the euphemisms I use for her. The photo was taken at dinner on the cruise we took in January, in advance celebration of my retirement February 1st.

We had a great time on the trip.

I wrote about meeting her once before, here, including how I knew the minute I met her, that I'd marry her one day. But in the midst of recuperating from my recent prostatectomy, another fact came invading my brainspace and I thought I should write it down before I forget it. So I am.

I've been a bit of an invalid since the surgery; first a catheter and then rediscovering the joys of a dry diaper (while some seriously insulted muscles re-learn how they're supposed to behave) will do that to you, you know. When I left the doctor's office last time, I asked him "What should I wear ... boxers or briefs". He responded "depends".

But don't feel sorry for me ... it's the closest I've felt to being a kid, in YEARS.

Anyway, my bride of 49+ years has taken absolutely wonderful care of me these couple of weeks following surgery. She is understanding, accommodating, encouraging, and tolerant of my whiny backsides, and generally does that Proverb 31 thing in real life. But the thought that interrupted my general stupor so recently was this: if you read the blog post, you know beyond a doubt, that she was absolutely a direct and dramatic gift from God, coming at a time when I had neither the Spiritual eyes nor the common sense to realize it. Well, I cannot imagine a more loving gesture/gift/provision, from the hands of a loving God, than Peg has been, and certainly is now.

The money quote: The way Peg is loving me through her attitudes, actions, and encouragement is a very real manifestation of God's love for me. I've heard God loves me in sermons, for more years than I can really recall, but there's been somewhat of a shortage of real connection of that thought to things in my life that get me where I live.

I figure all means all, too.

Now ... I think we do the same thing in this area we do with the "in Jesus' name" thing ... that if we mention His name at the end of a prayer, or at the end of some pronouncement or other, that we've done that "in His name". But I don't think so.

I'm certainly no scholar in whatever languages the Bible was originally written in, but I can press the "I" button on my computer, which calls up Strong's (or B-D-B or Thayer's) and when I do that to the "in His name" thing, I get:

Now THAT makes sense to me. I'm not free to name and claim a lot of stuff, but when I'm about His business, operating in His authority and in accordance with His character, then I'm really about His work. And some promises then emerge, depending on my own limited ability to even recognize His work, and that even explains some rather extraordinary things that have happened in my life.

What's that got to do with Proverbs 3:5-6? Just this: the word used in that passage for "Acknowledge" (Him) in all our ways doesn't mean to name Him. Strong's tells me it means:

yada`: To know (properly, to ascertain by seeing); used in a great variety of senses...

Wow. Not only does God seem to want to bless me and provide me and love me, but He wants me to see it and know it! So how can I NOT tell this story of how God has been lovingly providing for me, since before I even knew I needed it?

And is still doing it, to this very day.

I saw a bumper sticker once that said "I don't believe in miracles .. I DEPEND on them".

Amen. Especially that "DEPEND" part.

Peg is truly a wonderful lady. I have not known her long, but I consider her to be a dear friend and cherish the times that we get together for a visit. I always come away feeling very blessed by having spent time with her. You don't have to be with her long to know that she loves the Lord and her family.

Thanks, Karen. I think CB was the first person I ever heard say "We both married above ourselves".

It didn't take him long to figure that out.

On the class, stay tuned. It gets more interesting, and unconventional, shortly.

A blog about my foot and then one about Grandma...Finally you wrote on two subjects worth reading about!!! Just kidding...I think!
Anyway,I like the emphasis on the word depend... I'm pretty sure it has taken on a whole new meaning the past few weeks?!? :)
I hope all is well with you and Grandma. I miss and love you both!

One more smart remark and I'll post some of your baby pictures here.

The only thing more upsetting than wearing Depends would be not having any. That would be a real bummer.