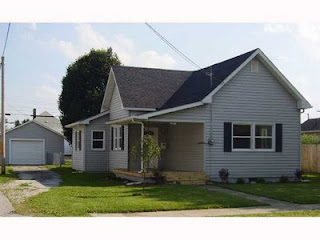 Take a look at the house shown on the right. It's located at 1017 West Main Street in Lebanon, IN. What makes it special is that Peggy's Mom and Dad (her stepfather, named George). spent their last 20+ years owning, and living in, that house.

The story of how Peg's Daddy, with failing eyesight and generally poor health, cared for, and took care of, Peg's Mom as she endured the ravages of Alzheimer's, is a touching story in itself. But this post is about the house, not about them.

They bought the house for about $2,000.00 in the early 1960's, and remodeled it as best they could. We took them to Indianapolis and helped them pick out some cabinets on sale, and George and I installed them in the kitchen. We then got some tile and I tiled the floors in the bedroom, kitchen and bathroom, and helped some with the plumbing.

The house then served them well through their twilight years.

When Peg's Mom got too bad for George to take care of, she had to be put into a nursing home, where she passed within a couple months. George moved out in 1994 and the house was sold, while George lived with a daughter his last few years.

We went past the house while we were in Indy for the SBC Convention, and saw that folks were working on it, having already put all new siding on it. Interesting, we thought, but then the house popped up on a realtor's website, complete with pictures showing an all-new and improved interior, new kitchen, new carpet, appliances, even some new walls.

God's a lot like that, you know. He sees us in our dilapidated state, moves in, renovates the place, and turns the $2,000 life we give Him into a treasure He can use to change whatever part of the world He cares to change.

Sure .. the shape is the same. It's in the same place. And of course one would notice new siding , and all, but when you look inside, you realize that all things on that street, in that house, have indeed become new.

2 Corinthians 5:17 says "Therefore if any man be in Christ, he is a new creature: old things are passed away; behold, all things are become new."

I hope the guys flipping 1017 W. Main Street do well with their flip. I also hope ... and pray ... that the Great Master Flipper Who took over my fleshly abode does as well with His.

I need to remember that phrase: "The Great Master Flipper."

I thought about the word "Renovator", which is more fitting, but there's so much attention to flipping houses these days, I figured I'd use that.

Wow again and thanks for sharing your perspectives...Hope..thats what He is about...turning around what seems hopeless and making something beautiful for Him...
yielded vessels..then He can work..the house yielded to the renovation..and it got flipped by the Master flipper into being one of value!
:)
izzy