I Got Your Cooperation Right Here, Pal... 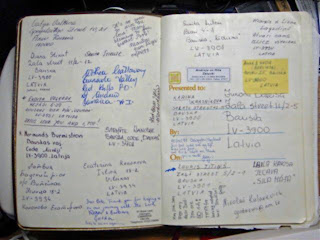 The Bible in the picture over there is the one I carried to Russia and Latvia on mission trips, in 1997 and 1999. You may notice a lot of writing in it, which I shall explain.

Some years ago, on a mission trip to Nassau, I asked the ladies in a little impromptu Bible study I held, to sign my Bible. I'd been sitting outside while my teen-aged team members did the VBS inside the (unfinished) church building; I suggested to the moms sitting there, that we study Psalm 23, and we did.

Several of the ladies were lost when they'd brought their children to the VBS, but were saved when they took their kids home!

Praise God; I wanted to track their names so I asked them to sign their names as I didn't have any other paper to write on. That started a custom I still follow, to this day. On the pages you see in the photo, there are signatures from friends in Germany, England, Jamaica, and mostly Russia and Latvia.

I cannot tell you how meaningful it is just to see their names there, and remember the visits with them. I wouldn't take anything for that Bible, literally.

The trips to the old Soviet Union were in cooperation with the Living Word Church, an independent pentecostal church here in Pelham. Their pastor, Truett Murphy, who's seen playing the keyboard (he's the one without the vest, on the right, in the video I've linked below), died in his sleep a few years ago; the church was merged (by pre-arrangement of pastor Truett) into the Church of the Highlands in Birmingham, as their Pelham campus.

IF ... Living Word Church's sole purpose for existence was to get me to Russia (which it wasn't), God nonetheless did a mighty work with the church during its brief life. See .. I was 7-1/2 when WWII ended, and I grew up in fear of Russia (and Russians). In the late 40's, when SAC was formed, I used to lie in bed at night and hear bombers droning high, high over our home near Chicago, and wonder if they were Russian bombers coming to kill me. So ... when we went and worshiped and fellowshipped .. and fell in love with .. Russian believers, it was a thrill for me which, to this day, I cannot fully describe.

We seem to have a tough time cooperating with other Southern Baptists, depending what baptisms they insist on in their church, what they think about Calvin and his concepts, how they pray, who baptized them, whether they call a glass of wine with dinner "sin", who they'll let take communion with them, etc, etc ad nauseum. Yet here we were, two radically different churches, singing God's praises in community services and at Pastors' Conference meetings, irrespective of lots and lots of ecclesiological and perhaps soteriological differences. And if you're wanting to criticize that, folks, forget it.

Cutting to the chase ... I may post more about the trips later ... the video to which I've linked below was taken as we sang in the last evening's services in the Pskov (Russia) Community Center. We'd learned the song "Because We Believe", and had one of FBC's members, Russian by birth, translate it for us.

We had the words in English and Russian on the overhead screen, all the time; you'll see them in the video. But the last time through the chorus, we sang it in Russian.

The results speak for themselves, and I encourage you to watch it to the end. It's a little over 4 minutes long, and I still get goosebumps, and shed tears, when I watch it.

we'll get to worship like that for eternity - what a God we serve! Thanks again Bob - your home movies beat the crud out of mine. Every tongue every tribe every knee - I can hardly wait!

Thanks, Bob, for posting this video of the worship service in Russia. A beautiful moment of shared praise!

Bob...I listened and was blessed. If mature born again Chrisians can not worship with their brothers and sisters in Christ there is something seriously wrong. I have got to the place to understand that until I get to heaven that I will never agree with all my members of the body of Christ...We all believe in growing in the knowledge of the gospel as we grow into the person God intends. None of us is exactly in our faith where everyone else is in his Christian walk.