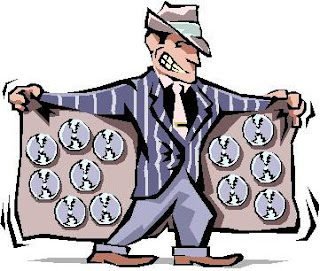 I said something the other day, without even thinking about it, that really rang a bell with me. It was this: "Salvation needs to be sought & bought, not told & sold." I don't know how theologically sound that is, but I've always been taught we should be wary of "picking green apples"; that is, selling someone on salvation when they may just be going along to get along. So ... here's my rationale:

When I look at Acts, and see the sermon Peter preached immediately after the big commotion when the Holy Ghost came upon them (I don't think I've ever seen a big ruckus in a church when the Holy Spirit came upon people....), I note that Peter simply told them the historical truth and the simple facts about Jesus, and the crowd's responsibility for His demise. The crowd's response was to ask what they must do to be saved.

Seems like it was a seller's market ... that is, the buyers wanted some of what Pete and friends had. A couple of random thoughts about that:

First, that relieves me of a lot of responsibility. I can't save anyone, anyway, and we usually say things along those lines, but act as though it's our task to "tell and sell" salvation. And it isn't.

M-W Online defines witness as: "attestation of a fact or event; testimony ... one that gives evidence; specifically ... one who testifies in a cause or before a judicial tribunal ... one asked to be present at a transaction so as to be able to testify to its having taken place ... one who has personal knowledge of something..."

Hmmm .. that sounds simple. A witness is supposed to tell what he's seen. But the church seems to have heaped on that, the requirement that we know the "plan of salvation" and be able to "lead someone to the Lord".

Secondly, I don't think salvation is supposed to be "Told & Sold". Told by someone witnessing and Sold via leading questions, etc. Rather, I think the transaction should be more like "Sought & Bought". Sought, by someone to whom God has said "You will surely die", and Bought by surrendering your life to Jesus. Sort of exchanging your life for His.

In our zeal to see the Kingdom expand, we seem to have lost sight of the fact that the battle for souls is NOT ours. It's the Lord's. Our responsibility is to go and tell. To tell of what we have seen and heard (as Paul put it, anyway). Too often the "what we have seen and heard" comes down to a rehearsed, pre-prescribed (can you say "I had a life-changing experience", anyone?) "testimony", that rings hollow in the ears of keen observers. And we can ALL be involved in that process of telling others, from caring for seekers' children, to preaching the word, to telling folks, to teaching Bible to believers. It doesn't matter if we've memorized a "plan".

It's a body, remember, that's doing the work. And if we're saved, we're part of that body.

We've also lost sight of the fact that the biblical pattern seems to be tell the story, and then people respond. And I don't see a lot of prompted responses in the biblical tales, (think .. "is there any reason you wouldn't want to receive this gift of eternal life, right now?) either. We don't seem to want to wait for God to move in someone's heart, and will use all the right questions to lead them to the "right answers". I'm just not that comfortable with all that.

I'm reminded of a good friend who knew me before Jesus got hold of me, who later saw me testify to experiences on the mission field. He thought something like "If God got THAT guy there must be something to this religion thing", started going to church, and was subsequently saved. He saw something he wanted, and God moved in his heart to produced fruit that we seem to want to take credit for.

God even dropped a hint in the Old Testament. In Ezekiel, He tells us:

"Son of man, I have made you a watchman for the house of Israel; so hear the word I speak and give them warning from me. When I say to a wicked man, 'You will surely die,' and you do not warn him or speak out to dissuade him from his evil ways in order to save his life, that wicked man will die for his sin, and I will hold you accountable for his blood. But if you do warn the wicked man and he does not turn from his wickedness or from his evil ways, he will die for his sin; but you will have saved yourself." Ezekiel 3:17-19, (NIV)

I don't know how theologians interpret that, but it seems to me to mean that when GOD speaks to someone of their condemnation, we are under orders to tell them the remedy. It doesn't say we're supposed to tell them ourselves, and in fact, it may be that in so doing, we lead people astray. We cause them to say the words without any conviction of the Holy Ghost.

Now I don't really have any answer for the question of how to discern that, other than the thought that God honors folks who lean on Him for revelation rather than trying to simply reason something out. When we ordain someone as a deacon, they're supposed to be full of the Holy Spirit and wisdom. We can probably spot the wisdom, but how can we discern the Holy Spirit? Are we to simply assume that if someone says they're a believer, that they're "full of the Holy Spirit?" I think that might explain why I've seen churches ordain as new deacons:


It really does puzzle me that the church organization which has the self-professed "most biblical" soteriology, theology, and ecclesiology, has something north of 50% of their claimed membership walk the aisle, join on our terms (they don't get to dictate those), and then fall by the wayside. Is THAT how Jesus would have us build the church?

I don't think so.

The need for an Ascol/Barber/Yarnell resolution on integrity in membership .. whatever you call it .. tells me something is drastically wrong in the camp. And it's been wrong for a long time, and nobody wants to really call it what it is.

This is good stuff Bob. Maybe because I agree with you and have thought this for a long time. Naw. It's that good even if I disagreed with you. Which I don't.

Wow. This has got to be one of the best, most straight-forward, posts I've had the honour to read here, Bob.

You've just put into words the nagging discomfort I've felt about the 'told and sold' brigade for years. I mean the kind that's packaged up like you described.

This post really hits on something so fundamentally deep. I pray people in 'certain places' will come across this post and be convicted by the Holy Spirit.

Thanks for sharing what I believe was revealed/articulated to you by the Holy Spirit; what a blessing! And praise the Lord!! He's definitely moving and shaking things up these days:)!!

P.S. I'm so thankful the Lord has blessed me with a few 'sources' online that have been such an encouragement and blessing to me. I'm constantly amazed/awed, as I learn and grow closer to Him, just how faithful He is........to such an unworthy soul such as myself.

Debbie & TLG: Thanks so much for the kind words.

Oh, Tiger Lamb Girl: Have you ever visited Holy Trinity Brompton? One of my most memorable worship services EVER was there, perhaps 8 or 10 years ago.

Dear Bob,
No - I've never been to Holy Trinity Brompton. (I don't even know where Brompton is, I'm afraid).

Please pray for me. A lot going on right now. Lots of spiritual stuff. My only source of strength, courage, discernment and fortitude to do His will is in Him. There are a few things I know He wants me to do; and I will do them, but I need courage so I don't chicken out, so would appreciate prayers. Bless you.

The smallish church-like building in the middle is HTB.

If you'd like to email me about whatever problems are involved in your wrestling match, I'd be happy to offer whatever God might send my way....... and Peg's been through a lot of stuff and she's with me in all this, too.