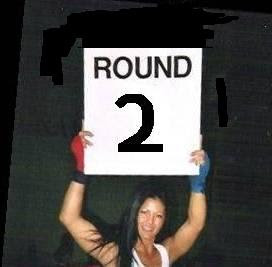 I didn't call the last one Round One, as I didn't know there was a Round Two.. And there wasn't, until some more ideas came crashing in to interrupt my train of thought.

One of the few times I've ever "delivered a message" in a church .. I didn't call it preaching but Pastor Calvin Mathews at Red Hills Baptist in Jamaica said it was .. I dealt with this subject in an indirect way. The message concerned why I though we were in the end times, and what I thought people ought to do about it.

I mentioned the resurrection thing and the importance of believing that with all your heart, first. I did that because that seems to be the hardest thing to believe about Him. Mankind has come a long way, but I don't think we're anywhere NEAR raising someone the third day after they die.

Then I focused on the other parts of Romans 10:9:

"That if you confess with your mouth, "Jesus is Lord," and believe in your heart that God raised him from the dead, you will be saved." Romans 10:9, NIV

I got to looking at the words. "Confess" means to agree with God, specifically... " homologeo", covenant, acknowledge .." . Now, I don't know a lot about the law, but I did study a bit of it in some insurance courses, and I know that, to have a contract .. which a covenant is .. there must be a "meeting of the minds". We have to be saying the same things, and meaning the same things.

At least that's what Strong's told me.

What I asked the folks at Red Hills was this: How much of your life can you withhold from His control .. His Lordship, and still have it be true, that He IS your Supreme Authority? How about........


I don't think there's anything. Nothing at all. You have to yield control of it all.

I assure you I didn't deliver that simple message with any dynamism or eloquence. But something in it must have spoken to the people, as the invitation went on for about an hour. And this was at a church of 125-150 people who hear good preaching every week, and are a terrific bunch of Christians who always treat us just exactly as you'd expect devoted believers to treat their brothers and sisters.

Surrendering yourself thusly to Jesus is a pretty big decision, and not to be taken lightly. And I wonder why someone can surrender thusly and then fall by the wayside.

So. Maybe we HAVE made it too "easy".

ps: I wondered as we left, if that was some kind of "fluke" ... that there was some pent-up need for people to deal with God. Maybe there was, but I think God stepped in and affirmed what I'd said, a few hours later. As we were sitting around the (rented) house that afternoon, the phone rang. Neal Blackwelder answered it and said something like "Yes .. it was ... he's right here . do you want to talk to him?". It was the lady in the other half of the home we were renting. They'd always left the house before we got up, and didn't come home until after dark, so we'd never seen them. What she said was that she and her husband had visited Red Hills that morning, and had heard me speak. They called around some folks they knew and finally found us and called. She then said something on the order of "We listened to what you said, and have come to the conclusion that, if we're not pointing people to Jesus, our lives don't count."

WOW. I told her that MUST be direct from God, as I hadn't said anything NEAR like that, that morning.

AND NOW, as Paul Harvey says, the rest of the story. When we rented the house a week before, I met with the owner, paid him for the 10 days, and then witnessed to him. He was not receptive, so I asked if he might like to talk to someone from the Red Hills Church. He said "yes" and we left it at that.

SO.... when the lady next door said what she did, I said to her "Well ... I have your first assignment for you". She perked up and said "What is it?" I said "Talk to your landlord". She said she would do that.

God surely honored what I said that morning ... well ... it all came from Him, anyway, so I guess that makes sense. But it sure ruined my taste for "Easy Believism", seeing folks in the church, and even next door to our temporary home, react so positively to a challenging message.

The message Christians are teaching is not the problem. It's the fact that some of the people teaching the message aren't living it.
In Peter Scazzero's book, Emotionally Healthy Spiritually, he sums it up with one question: "why is it that so many Christians make such lousy human beings?".

I think of the same thing when I read this post as I did when I read round 1. I recently listened to a sermon by John Wimber on the Holy Spirit (Kingdom Rain podcast feed on iTunes). He observes that effective evangelism requires both the proclamation of the word and the work of the Holy Spirit in the hearts of the hearers. The words alone don't do it.

So, was it a fluke? Nope, it was God getting hold of these people, taking your words and putting a little fire in them.

May he do it more and more!

"this gospel is growing and bearing fruit among you, just as it has around the world." Col 1:6