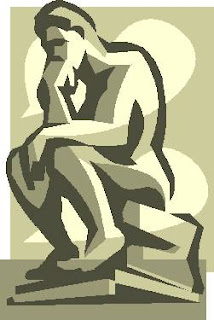 Yeah .. I didn't know it, either, but then some more thoughts came crashing in....

Oh well. So here goes: We cherish the concept of salvation by faith alone, without the necessity of works. Last time I heard this preached, the reference was made that the "faith" referred to in James 2:24 wasn't "saving faith" but some other form of self-reliance on one's own merits. So I looked up the word and found that the word "faith" there is pistis; persuasion, i.e. credence; moral conviction (of religious truth, or the truthfulness of God or a religious teacher), especially reliance upon Christ for salvation ...

But I wanted to be thorough, so I checked out "justified", which the verse refers to, which is originally dikaioo, meaning to render just or innocent. Which is what happens to us when we get saved, right?

Hmmm. We can argue that all day long, and I certainly agree that NOTHING that I ever DID earned me salvation. And I've heard all the arguments along the lines of "when works don't follow, you really weren't saved by faith", but something about that comes up short for me.

Well it's one way or the other, but I do have to wonder: WHY DON'T WE TELL THIS TO EVERY DROPOUT FROM ACTIVE CHURCH MEMBERSHIP? It ought to be easy to do .. I mean .. we got MILLIONS of'em to choose from, so it seems. Perhaps it is that we don't really care, as long as the numbers are up there and the bills are covered.

There's another thing in the "routinization" of churchiness that bugs me. We have had a "revival" (I shudder to use that term....) at church most every year since we've been in the Baptist church. And every year, we hear 2 Chronicles 7:14 trotted out ... "...if my people, who are called by my name, will humble themselves and pray and seek my face and turn from their wicked ways, then will I hear from heaven and will forgive their sin and will heal their land", in the NIV. Guaran-doggone-teed to get you a revival and if we don't have one, it's because we didn't do that stuff right.

I don't think so. Why doesn't anyone ever include the verse immediately PRECEDING that one, in the sermon? I mean, doesn't THIS sound important?

2 Chronicles 7:13: "When I shut up the heavens so that there is no rain, or command locusts to devour the land or send a plague among my people...", again the NIV.

Wow. God is telling us (if the passage DOES apply to us at all, and if it doesn't, then why do we hear it before the supposed "revivals" anyway....) that WHEN God does all that stuff to us ... dryness ... plagues ... starvation ... or the Spiritual equivalent thereof, and we're consequently in a heap of trouble, THEN we'd best turn from our wicked ways. So .. when the revivalist is planning a visit, are we saying that we are poverty-stricken, plague-beset starving people, spiritually speaking? If that were true, shouldn't the pastor have told us the dire straits we were in, say, the month before? Or 6 months? And what does that say about the ability of the the pastor to shepherd a flock successfully, if that's expected to happen to us annually?

And if faith without works is dead, and folks who never show up (except maybe Easter and Christmas) are in a heap of trouble since their works do not evidence saving faith, shouldn't we check out Ezekiel 3:18 where it says (God speaking) "When I say to a wicked man, 'You will surely die,' and you do not warn him or speak out to dissuade him from his evil ways in order to save his life, that wicked man will die for his sin, and I will hold you accountable for his blood", again the NIV, and be telling all the dropouts they're condemned to death?

Perhaps they .. and us, too .. should be reminded that Jesus Himself said ""Not everyone who says to me, 'Lord, Lord,' will enter the kingdom of heaven, but only he who does the will of my Father who is in heaven. Many will say to me on that day, 'Lord, Lord, did we not prophesy in your name, and in your name drive out demons and perform many miracles?' Then I will tell them plainly, 'I never knew you. Away from me, you evildoers!' Matthew 7:21-23, NIV. Shouldn't THAT gem be shared with the "dropouts", too?

Why aren't we doing that? Don't we believe it?

I don't know. If I did, I supposed I'd be rich or famous. But there seem to be a lot of elephants in the sanctuaries, and I think it's time to shape up before we ship out. And I also know this ...(hang on ... here comes my favorite new buzz-phrase):

"Life is a DEATH SENTENCE .. but death is a LIFE sentence."

I have an answer to the role of obedience with faith.

"If that were true, shouldn't the pastor have told us the dire straits we were in, say, the month before? Or 6 months? And what does that say about the ability of the the pastor to shepherd a flock successfully, if that's expected to happen to us annually?"

Have you read the pastor's comments in the latest newsletter?

Bob,
Will you come preach at our church next week?

Sorry, Harold, not unless you go to church in Indianapolis. We'll be there for the convention.

And .. you cannot imagine how humbling your words are. Thank you for saying that.

Bob,
Do you and Peg ever get over to England? If ever you do, please let me know so I can be here when you come. I'm in the Southwest and wouldn't want to miss meeting you and Peg, and hopefully hearing you speak at one of (or many) the local churches.

Round Four coming up?