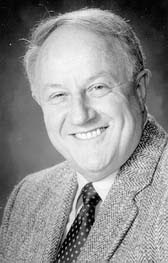 I was going to write a post about things I didn't understand about all that's going on, and parts of it (in my mind) brought back a conversation of perhaps 25 years ago, among Peg & I and Dr. E.J. Leverett Jr., head of the Department of Insurance of the University of Georgia. His wife was there, in the conversation, too. It surrounded the gift of unknown tongues, which had not yet been manifested in my life. EJ and his wife both said what an empowering and uplifting and edifying experience it was, for them.

Not its onset in their lives, but its exercise when appropriate.

Well, I didn't like it a lot; I'd prayed for the gift many times and had then simply given it over to God and said He'd have to do it 'cuz I wasn't gonna try no more. Praise God, He did drop it into my life many years later, and I never did tell EJ that it's happened.

So in preparing for the post I had in mind, I did a little Googling. I learned that EJ had died, in August of 2007. Somehow I felt a pretty big sense of loss, even though I hadn't seen him in about 24 years..

I'm going to have to wait to tell him, now, that he was right. Hopefully, a long time.....

EJ was one of the major factors in the formation, by Ken Williams, of Marketing Management Inc., the company I moved to Alabama from Indiana, to go to work for. Whatever I am, as a businessman, today, I owe to Ken Williams, and my experience working for him at MMI for about 9 years starting in 1975.

So, to the extent that EJ contributed to MMI (and Ken would tell you he wouldn't have started it without EJ), and alerted me to certain Spiritual gifts, I guess I owe him. Bigtime.

But I noticed something else in poking around Google that brings up a good point. I read testimonies from former students of EJ as to how he'd impacted their lives, as a professional friend, teacher and mentor. Unrelated to things Spiritual. They noted that he had a terrific sense of humor, and they were sure right about that. I recall one time when we were all at a meeting, and Ken Williams gave a dynamic speech, very direct (I recall it being about problems in our industry but my memory ain't so hot). EJ remarked to Ken a few minutes later "You sure put the corn down where the hogs could git at it".

That was EJ. A genius in insurance, from other tributes I read a wonderful Christian and church member, and funnier'n a crutch (as my Mom used to say).

Which brings me to another point. "He that winneth souls is wise".

The normal admonition that comes with that verse has always troubled me. As an ex-Presbyterian, I've known all along that WE cannot win a soul. Only God can do that, and that's most often (I suppose), done when we tell somebody about Him. But the telling is not the winning. SO ... to appease my curiosity, I went to my computer Bible; what I found was this:


Winneth: laqach; to take (in the widest variety of applications):

Might it be that the verse tells us that he who is winsome, who attracts people, who befriends people, who receives people, is wise? Gee .. that sounds like a great thing to do on so many fronts that it gives me the feeling I am surely wrong, or else everybody'd already know that. But if I'm close to right, then we really have Witnessing Programs, and we train to witness to people.

So why do we refer to it as "soul-winning"?

EJ was all of the above. He was friendly, a man of wonderful humor, common as an old shoe besides being one of the world's best in the insurance industry. And last but not least, responsible at the human level for lots of rejoicing in the heavenlies when souls were added to the Kingdom.

In my first-ever Spiritual training, I heard "If you would win some, be winsome". EJ was, and did.