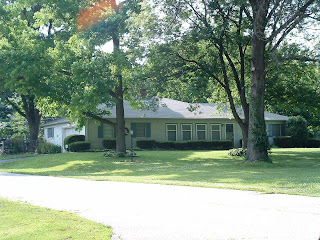 Please, dear reader (if any), read this in the context of ALL glory being God's ... of my bringing pond scum to my first meeting with Jesus, and of anything other than pond scum in my life today .. and ever since .. belonging to Jesus. But I believe we should be open about our experiences when the occasion calls for it, as I'll establish later. I believe in the priesthood of the believer, but also the humility of the believer. After all, we have a LOT to be humble about.

I've got a lot of neat stories that I love to tell people.

When I was 15, we moved from Calumet City, Illinois, to Indianapolis, Indiana. To the house in the picture. This first vision I had of it, as Mom & Art & I pulled up in front of it, was Dad cutting the weeds in the front lawn with a 2-wheel garden tractor. There were several little saplings about an inch in diameter lying on the ground, and Art and I helped him dig holes that afternoon and plant those trees.

That's them in the picture! Note: I no longer say I am older than some really big trees. I really am!

A couple years before, when I was an 8th grader (1951), I met a man who was 100 years old. He'd met President Lincoln! Imagine .. I'm in a generation which is that close to such history.

In a related item, my first job was holding dogs for a veterinarian, who was in his 70's at the time. HIS first job had been tending the firehorses for the Indianapolis Fire Department, before trucks had been invented.

I ran into Liberace in the casino at the Las Vegas Hilton in 1974 and got his autograph.

One of my peak experiences in life was standing under a picture of Lenin in the Pskov (Russia) Community Center and singing praises to God. Another time there, we sang "Because We Believe", the last chorus in Russian, and the audience stood as one and shouted and praised and lifted their hands in praise when we broke into their language.

I fell in love with Peg the instant I saw her and told the man who introduced us, then and there, that I was going to marry her.

I'm retiring shortly after the first of next year. I don't know what I'll be doing, but God has enabled us to retire from the workplace and be available if God has anything in mind.

One of my grade-school friends, Carol Browe, and her eventual husband, founded and own Crate & Barrel. I still have all my Grade School class pictures, too!

Another school friend, Bess Montagno, was one of the hostages in the Embassy standoff in Iran during 1979-1980.

Another friend, Larry Pierce, was a coach on the Olympic Figure Skating Team, who was killed with the team on the way to the Olympics in a plane crash.

So why do I say all this stuff about me? Simple: I've been privileged to do and see and experience these things, and I'm not at all reluctant to tell these stories to someone if there's any relevance in a conversation.

I'd guess you're not ashamed to share the stories of your life, either.

Why are we in the least bit reluctant to tell our stories? Are they not that important? Are we not that certain we're right? Do we think there's some "model" we need to be "up to" or we're somehow deficient? Do we think our story isn't interesting?

Peter and John were called before the Elders, Rulers, Teachers, and the High Priest to account for the radical stuff they'd been saying. Their response was a classic indication of the first thing I need to keep in mind when I'm out & about:

Here's what M-W Online's Dictionary says are the first 4 definitions of the word "Witness", which Jesus said we're to be:

1: attestation of a fact or event : testimony
2: one that gives evidence; specifically : one who testifies in a cause or before a judicial tribunal
3: one asked to be present at a transaction so as to be able to testify to its having taken place
4: one who has personal knowledge of something

***Edit Note*** Did you catch that? I didn't, at first (or second or third). Look at #3 again ... one who has been asked to be at an event so you could give a first-hand report, later! For all the Spiritual things we've been involved in, maybe one of the reasons we were INVITED was so that we COULD "testify to its having taken place"!

Isn't that what Peter and John were doing, and what Jesus said we were supposed to do? And be? Isn't the fact that Jesus thought enough of you to invite your participation in the work God started, then continued in Jesus, and then passed along to you and me (comprising the church) enough to move such testimony from burden to privilege?

I'm not burdened to tell you the stories of my life. I'm privileged to do that. I get a kick out of remembering what all God has arranged in my memory bank. So .. when I somehow feel that the wonderful salvation and abundant life that Jesus showered on me is less exciting or interesting or relevant to life than those other things, I have to ask myself what's wrong in me that brings that about.

I was standing on the end of a pier in Port Royal, Jamaica, looking across the harbor, at the lights of the city of Kingston, on March 20, 2003 ... our 44th anniversary dinner there with Neal & Debbie Blackwelder. My younger son Brad called my cell phone and said that the US Government had just invaded Iraq, and they'd also invaded the HQ of HealthSouth Corporation here in Birmingham. I'll never forget that moment.

As I was walking back to the table to tell Peg & the Blackwelders, 3 men sitting at the head end of the dock said hello. We chatted for a few minutes and I told them why we were there, and about Red Hills Church. I then shared the gospel, and the Dockmaster at Morgan Harbor's Hotel prayed to become a believer that night.

Two more interesting stories. But the question pops into my mind: which one am I likeliest to recall?

Which am I more excited to tell?

I can't imagine going through a day and not sharing the Gospel with someone. It's as if I'm sixteen again and want to show everyone my new car. Just remember, when you seek God, immerse yourself in Him with all your heart, mind, and soul, he will give you what you want most of all...more of Him.

Maybe we are "wired" to tell the our secular testimonies first so the listener will become interested in what we are saying. Then after we have generated interest and a relationship they will be ready to listen to our Christian testimony.